Since 2013, Prime Minister Peter O’Neill has repeatedly promised the unlawful SABL leases will be cancelled, and in June 2014 the National Executive Council endorsed the recommendation from the Commission of Inquiry that the leases be revoked.

But Minister Benny Allen and the Department of Lands are still stalling on any action and have failed to cancel any leases.

Community advocacy group ACT NOW! is condemning plans by the government to convert unlawful SABL leases to another form of land tenure using Incorporated Land Groups. The Lands Minister revealed the government’s intention when speaking to the media last Friday. [1]

ACT NOW! says converting the SABL leases  would not only repeat the injustice and human rights abuses inherent in the original SABL leases it will compound the problem by giving control over vast tracts of land to a small number of people overseen by a corrupt and dysfunctional Department of Lands. 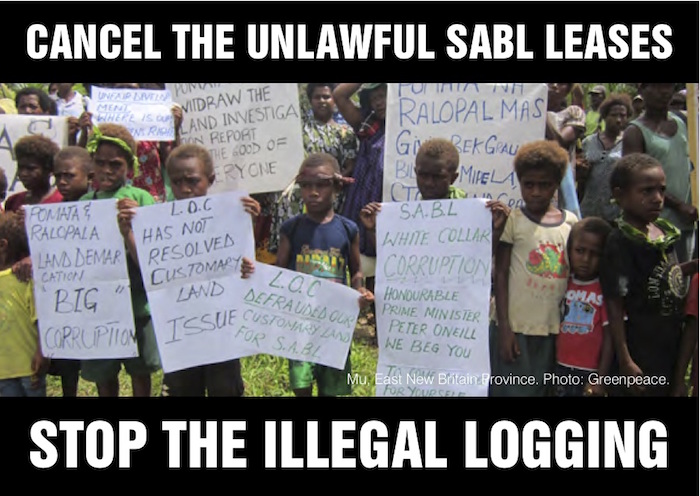 A 10,000 signature petition is today being presented to the government calling for action on the SABL land grab.

The petition is being presented by Paul Pavol, who was last year awarded the international Alexander Soros Foundation Award, in recognition of his communities efforts to oppose four unlawful SABL leases over their land.

Mr. Paul Pavol, from the Pomio District of East New Britain, was awarded the Alexander Soros Foundation Award for Environmental and Human Rights Activism at a ceremony in New York last Thursday.

Community activist group ACT NOW! says the recent corruption case in Singapore involving former Prime Minister Michael Somare emphasises the need for Australia to do much more to crack down on money laundering from PNG.

Around 70 community leaders from Madang Province are meeting this week to discuss the lack of development taking place in the Provinces and to begin organising ahead of the 2017 National Election.

The meeting has been arranged by ACT NOW! and is being hosted by the Tropical Gem community network. The theme for the meeting is "Rise Up! Return to Your Roots".

For three years Prime Minister Peter O’Neill has failed to cancel unlawful SABL leases affecting over 5 million hectares of land and has failed to deliver on his promises to return the land to its customary owners.

“Tomorrow, June 24, will mark the three-year anniversary of the Commission of Inquiry reports that exposed the whole scam and confirmed the leases are unlawful”, says Eddie Tanago, Campaign Coordinator for ACT NOW!

A new on-line petition calling on Papua New Guinea’s Treasurer to launch an urgent investigation into the logging industry and its tax record has collected over 800 signatures in just 10 days.

The petition is a response by community advocacy group ACT NOW! to revelations most logging companies operating in Papua New Guinea avoid paying any corporate taxes, depriving the country of hundreds of millions of dollars in potential revenues.