The Indigenous communities of Collingwood Bay, Papua New Guinea are engaged in a high stakes battle to defend their land and culture from the threat of Conflict Palm Oil expansion and they have a quick and easy request for help right now.

Much of RAN’s forest team is currently in Medan, Sumatra for the annual meeting of the Roundtable on Sustainable Palm Oil (RSPO) and we are honored to be hosting Adelbert Gangai and Lester Seri, community leaders who have traveled from their home in Papua New Guinea to represent their people in urging the RSPO to protect their ancestral lands.

Early this year, the Indigenous communities of the fertile and unspoiled Collingwood Bay region learned that notorious palm oil company – and RSPO member – Kuala Lumpur Kepong (KLK) was claiming ownership of three large land development licenses within their customary territory. Community representatives quickly filed a formal complaint with the RSPO last April, but while other complaints filed more recently have progressed through the complaint process, the Collingwood Bay case has been essentially ignored by the RSPO.

Please send a message asking the RSPO to immediately take steps to resolve this urgent case.

In just the last week, KLK has been discovered moving ahead with development by bringing oil palm seedlings for planting onto Collingwood Bay lands, making immediate resolution of this case of the utmost urgency.

KLK’s latest development proposal is every kind of wrong. It is the ugly face of Conflict Palm Oil and it would create an entirely predictable and preventable disaster for the people and wildlife of Papua New Guinea.

The land in question covers over 100,000 acres of primary forest, community gardens, traditional hunting grounds, and broadly scattered coastal and riverside villages. It is community-owned land that is the home and source of livelihood for nine tribes speaking six languages representing 326 clans.

This land dispute pits a deeply rooted traditional community with a subsistence-based economy against a major foreign company infamous for its intransigence and human rights violations. You may remember KLK as the company that RAN exposed using slave labor on its plantations in Borneo as far back as 2010 and child labor on plantations in Sumatra in July of this year. Even among its peers in the shadowy world of Conflict Palm Oil producers, KLK is among the worst of the worst offenders.

Under the Papua New Guinea constitution, it is illegal for customary lands to be bought or sold without a lengthy review process that requires the explicit consent of all community members. In 2010, all nine chiefs issued a strong statement that irrevocably stated their disapproval of any plans to introduce the palm oil industry in their area. 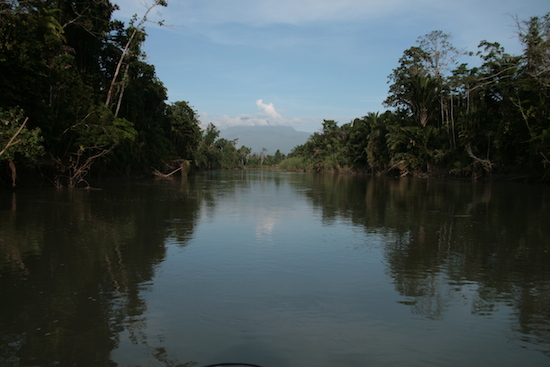 The people of Collingwood Bay rely on this crucial ecosystem. Photo: Erik Wakker

These communities have a long history of defending their territory from would-be corporate land grabbers. In fact, as a result of their efforts, the National Court of Papua New Guinea ruled in 2002 that the leases for the exact parcels KLK now claims to own were illegitimate and illegal. KLK says the newly issued licenses are now legal, but community consent has not been acquired and the circumstances they were issued under are highly suspicious and are currently under review by the courts again.

The Collingwood Bay dispute is a critical and high profile test of the legitimacy of the RSPO’s complaint resolution process. The RSPO exists in large part to help resolve conflicts of just this sort between companies and communities. Unfortunately, in practice this RSPO process has proven to be largely a failure and this case exemplifies the problem.

Your voice matters—the RSPO hides behind claims of sustainability. Tell the RSPO that land grabs aren’t sustainable or acceptable.

RAN and our allies are watching this case closely as it has been over half a year since the RSPO received the Collingwood Bay communities’ formal complaint. Allowing industrial palm oil development by an RSPO member company to destroy primary forest within customary Indigenous territory against the consent of its ancestral owners would go against everything the RSPO is supposed to stand for and would bring into question for many what purpose the organization serves.

To gain credibility in the eyes of the market and in communities impacted by palm oil development, it is crucial that the RSPO implement its existing standards and follow through with enforcement against member companies when breaches such as this case are brought to light.

Please take a moment to express your solidarity with the tribes of Collingwood Bay and ask the RSPO to resolve their complaint against KLK immediately.