With the International Finance Corporation (IFC) proudly trumpeting its expansion in Papua New Guinea we should all be aware of its true mission on behalf of the global elite and the world's richest corporations and nations.

Papua New Guinea is already beginning to suffer from the new neo-colonial landgrab with 5 million hectares having being seized in Special Agricuture Business Leases, and the IFC is in the thick of this global phenomena, as the article below by Ava Danlog explains.

Tens of thousands of the protesters demanding political reforms in Cairo as part of the popular uprising are women.

A lot of the news footage from Egypt's Tahrir Square in central Cairo showed men standing and shouting in the front rows of demonstrators, but the impression is misleading.

By a Special Correspondent

What more does Somare and his evil and corrupt Government have to do you to make you stand up and demand change?

The Constitution (the Mother Law) has been ignored, broken, tampered with and treated with contempt. Every other law of the land has been treated with similar; or worse; contempt by the Somare Government.

There have been two major victories in the last few days in the campaign to defend Papua New Guinea's Constitution and uphold democratic principles.

Violence against women is so widespread in Papua New Guinea that it is part of daily life for almost all of us. Everyday we see or hear of men physically and violently abusing women - but in 99.9% of cases both the victims and those of us who see what is happening remain silent. 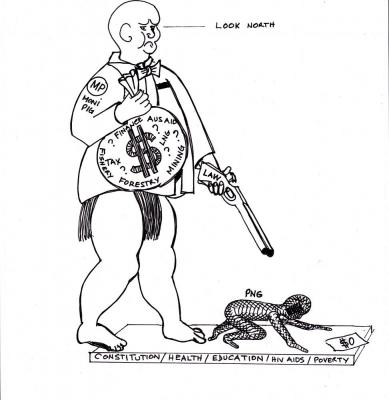 Bulolo MP Sam Basil is against the budgeted pay rise for Members of Parliament, announcing to his district that he “didn’t get into parliament to get a pay rise, but to bring development and services down to the people.”

Mr Basil said this on Monday during the launch of the EMTV and Australian Network signals into Lekluk village in Mumeng Local Level Government area.

He described as “ridiculous” the decision of the Somare government, seeing it as another luxury item on the Government’s wish list.

While the PNG government says in its budget unveiled this week that it wants to 'lower barriers to foreign investment' and remove 'business impediments, lower import tariffs and reducing regulatory burdens' it seems to have forgotten the interests of its own citizens in its rush to support foreign companies.

A new report by the International Trade Union Confederation says there are "serious and continued violations of fundamental workers' rights" in Papua New Guinea.

Papua New Guinea is likely to suffer a strong El Nino induced drought from mid-2011 which could last for up to 18 months.

The World Bank is pushing the government of Papua New Guinea to open tax free zones across the country where foreign companies can operate duty free and ignore labour and health and safety laws.